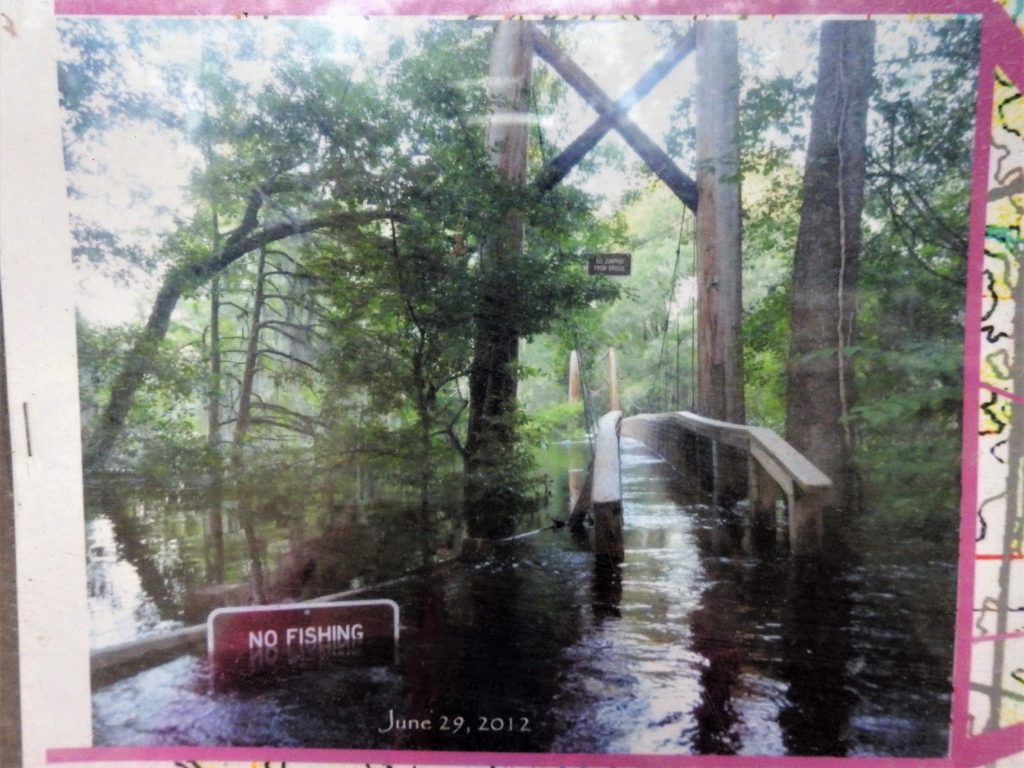 One wonders if Floridians will ever get tired of the vast amount of lakes, rivers, springs and miles of Atlantic and Gulf coastline the state has to offer. Are you kidding? There are far more watery getaways here than amusement park enthusiasts think. Get ready for an adventure in northern Florida.

Thirty minutes northwest of Gainesville, yes, fans of UF Gator Gainesville, lies the town of High Springs, population 6,000. While it doesn’t have the university atmosphere of Gator, residents are content to keep the landscape quiet and unpretentious.

An opportunity presented itself to spend 4 nights at O’Leno State Park in High Springs, built in the 1930s by the Civilian Conservation Corps and one of the first state parks in Florida.

The 6,000-acre site includes a campground with 60 sites with electricity and water and two core group sites. Part of the park offers an interpretive audio tour (via cell phone) of the remaining historic buildings of the former Town of Keno, a historic 52-foot foot suspension bridge over the Santa Fe River, a CCC museum, a nature center and miles of biking and hiking trails.

The Santa Fe River disappears at some point in O’Leno National Park, a fascinating feature of this river. The river flows underground in limestone caves called the Bellamy Cave System and surfaces 3 miles downstream at the River Rise Reserve. The Santa Fe begins near Gainesville and extends 75 miles west before emptying into the Suwannee River.

The main goal of our trip was to explore a small but sensational part of these 75 miles.

The Florida Department of Environmental Protection offers many good paddling guides. Figure 2 below shows High Springs Boating Boulevard northwest of 210 Ln and our drop-off point at Rum Island. See pages 5-6 for a good explanation of the 26-mile paddling route from Santa Fe and all access points. https://floridadep.gov/sites/default/files/Santa%20Fe%20Guide_0.pdf.

The seven of us were going to Santa Fe on this cold and slightly rainy morning. We decided to plan our own shuttle from start to finish. As most people know, keeping cats is not easy, so we often turned to our group. What appears to be the best intention to start early usually ends up being a dysfunctional hour because one or two “cats” can’t stick to the herd mentality. Today is no different, but such is life.

My husband, Dave, and another friend would be the shuttles. We loaded up the kayaks and headed to High Springs, 6 miles south of the national park. I left the kayaks here and held them while Dave and a friend went to the end point, Rum Island County Park, 7 miles south, to drop off one of the trucks.

The shuttle locations worked well and our herd magically joined all those who were now at the High Springs boat launch. We were ready for a 7 mile paddle down the beautiful Santa Fe River.

The Santa Fe, like many rivers in North Florida, is known for its occasional floods. The national park has a wooden moat next to the river that shows the years and levels of flooding since 1964. The historic peak was recorded in 1948 at 67 feet. The winter months are generally not a time to worry about flooding.

The park staff warned us to keep to the right while paddling. Mostly we did, but we also found large boulders to avoid what was at the bottom of the river.

The river was calm today. The only people we saw along the way were the seven of us, which was fine with us. With today’s overcast skies, the river was getting darker and browner, but if you looked right outside the kayak, you could see the clarity, the growth of water lettuce and longleaf grasses below you, or a turtle passing by.

We ventured less than 2 miles away when we had the honor of seeing two happy otters on the shore. We sat and watched them jump, swim back and forth, and one of them even entertained us by crawling into a fallen tree to stare at us for a moment. I tried my best to get a picture, but otters are shy and fast, preferring to play “catch me if you can” the closer we got to them. 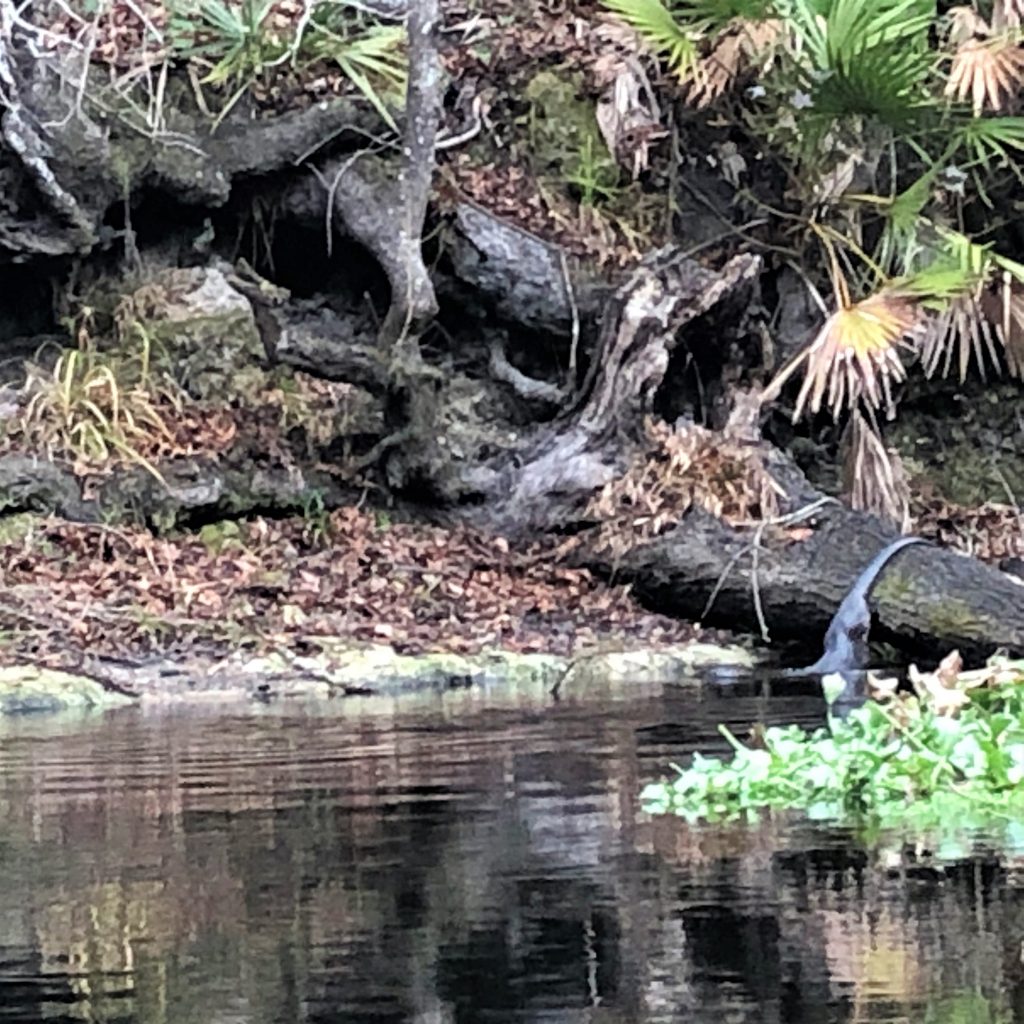 At mile 3 we passed under another access to the river, the highway bridge. 27 Although the flow of the river is sometimes stronger due to the higher water level, today it proved to be more of a “lazy river.” This allowed us to navigate the river with ease and had time to enjoy its beauty, look for wildlife, and seek out the many springs we crossed along the way.

During this 7-mile paddle, we passed 11 Santa Fe Springs that are marked on the river map at the High Springs boat launch. The number of freshwater springs in Florida is a natural occurrence. To truly appreciate the “real Florida,” you need to go on Google and understand why the protection of aquifers is invaluable to the ecosystem.

Some springs were barely noticeable, while others caused a jolt or spinning current. We shouted when our kayaks went a little faster, or gave a little jolt when we passed one of those unknown springs bubbling beneath us. 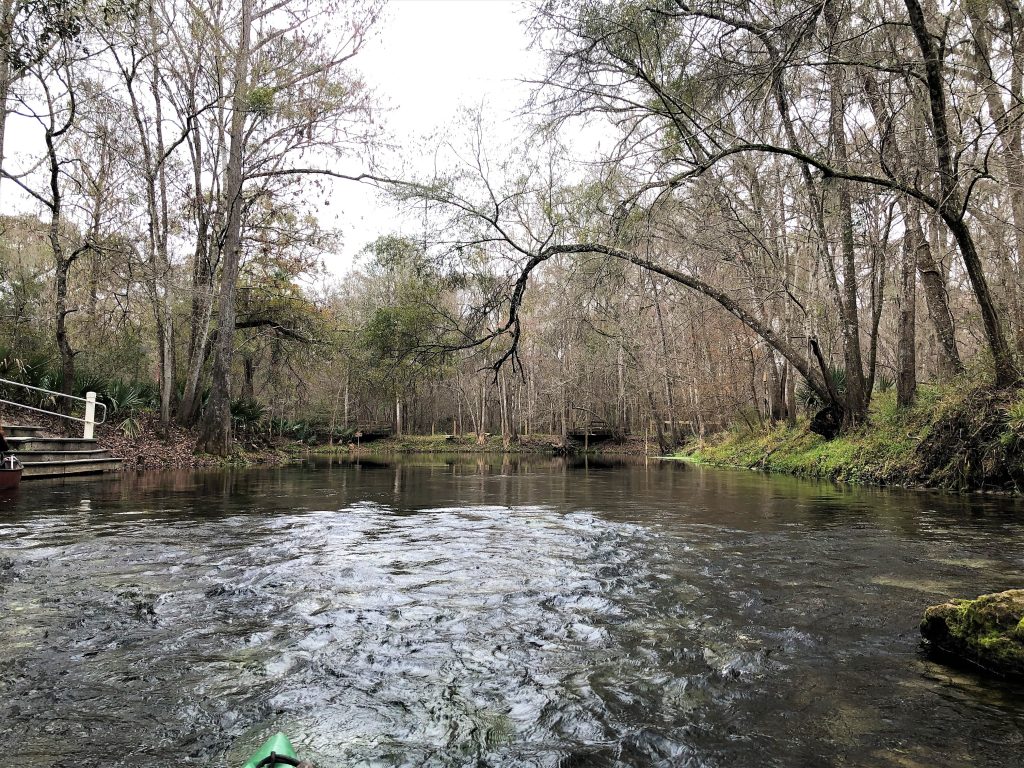 We came across the largest spring on our trip to Mile 6, Poe Springs. Poe Springs is a county park for a day for those who want to cool off in the crystal clear water. From Poe Springs, 45 million gallons of 72 degree water flows daily into the Santa Fe River. Our plan was to hike to Poe and visit this 25 foot high spring. There didn’t seem to be anyone in the park on this cool, drizzly day, so it seemed like a good time to explore.

Some of us paddled as hard as we could against the gurgling spring water that flowed into the river, but we didn’t get very far. Despite all our efforts, we could not get past the limestone gushing out from under our feet. We were convinced that with a water rise of only 15 cm, we could take advantage of this beautiful spring for bathing.

Unfortunately, this was not planned and we would not have had a sufficiently reliable base to transfer our kayaks in the spring. Next time, next time. 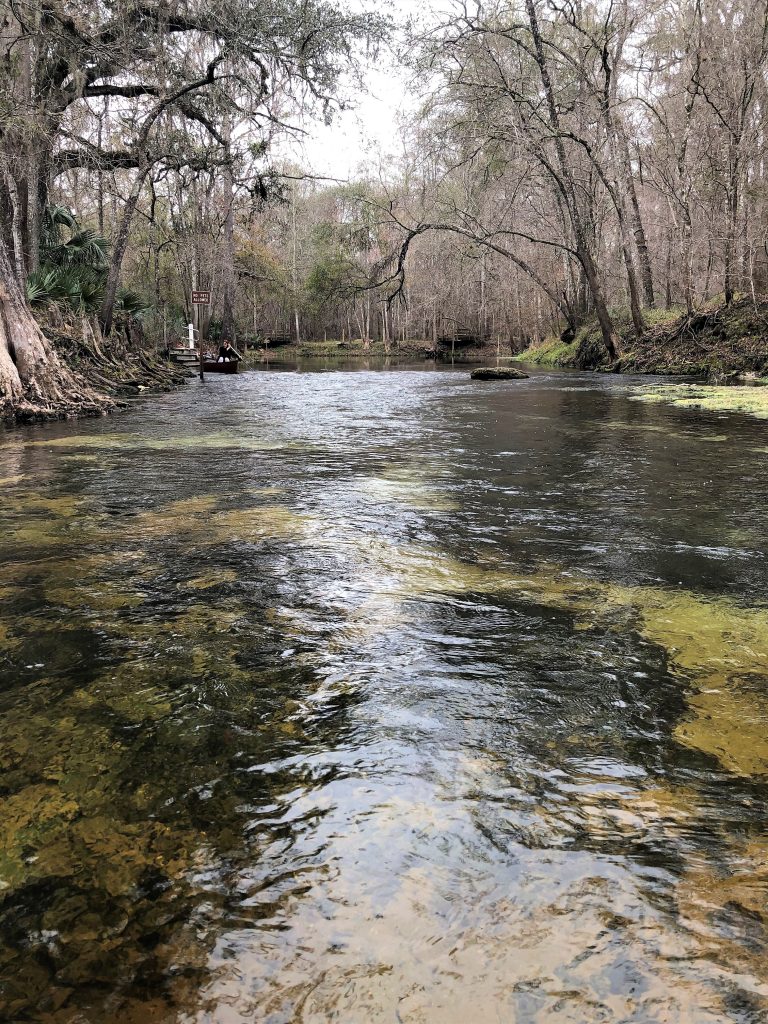 However, we don’t know if it was because of the weather or one of those days when the animals don’t come out. Of the two paddlewaters, we happened to see a couple of yellow-bellied turtles, jumping fish that would make any fisherman wince, and a few waterfowl-type birds. We heard owls, so we counted them.

On a river this big, you would think alligators would be a constant presence. For some reason, Santa Fe is not known for its large alligator population. That’s not to say they aren’t there, but we didn’t see them.

I think most people reading this article have never heard of John Edward Watts, a.k.a. Naked Ed. A legend in his own mind? No, Ed was actually a nice character if you read the stories of those who met him, and he is a legend to anyone who loves Santa Fe River Springs.

Ed, originally from nearby Lake City, encountered Lily Springs over 20 years ago while canoeing on the river. He fell in love with Lily Springs, a private property, but found it full of trash and litter. He asked the owner if he could clean up and take care of the mess.

Surprisingly, the landlord agreed and gave Ed a non-binding payment for 20 years. Born with a “brittle bone disease,” Ed could no longer work and became disabled. It became not only the place he loved to call home, but also the work he loved. He built a cabin of grass (perhaps one on stilts) and said he preferred spring life and his own company.

Finally, Ed installed the electricity and the telephone. He kept in touch with the canoe outpost to find out how many paddlers were out each day. Ed liked to greet the paddlers from Lily Springs and wore a loincloth out of respect for those he waited on, but the name stuck because some still thought of Ed as Naked Ed.

In 2017, Ed, in his mid-sixties, “retired.” He kept Lily Springs stomach and alcohol free and insisted that everyone he came in contact with have a pack mentality. So naked Ed wasn’t such a bad guy after all.

Battle in the nest

For the past 15 years, the North Florida Volunteer Council (OurSantaFeRiver.org) has been at the forefront of the fight against the Seven Springs Water Company to obtain a low-cost permit to withdraw one million gallons of water per day from the Santa Fe River for free.

Seven Springs Water will in turn sell it to Nestlé, which will bottle the Florida spring water at 6,000 bottles per minute and sell it to the rest of the world. That’s a lot of water and a lot of plastic! Florida continues to be swamped by other water companies who regularly get permits or are asked to do the same.

The fight to save Florida’s springs and aquifers continues. Supporters of the same goal can help get rid of plastic and reduce the need for well water by buying less bottled water. For more information on next steps, see www.floridaspringsinstitute.org.

Rum Island and beyond.

Rum Island, an alcohol-free county park in White, gets its name from the smuggling and contraband of alcohol that took place there in the early 20th century. For us, it served as a fallback point to Santa Fe at Mile 7.

Just beyond this exit there were several springs we hoped to explore, but the seven kayaks were wet and cold, and we still had to go back. 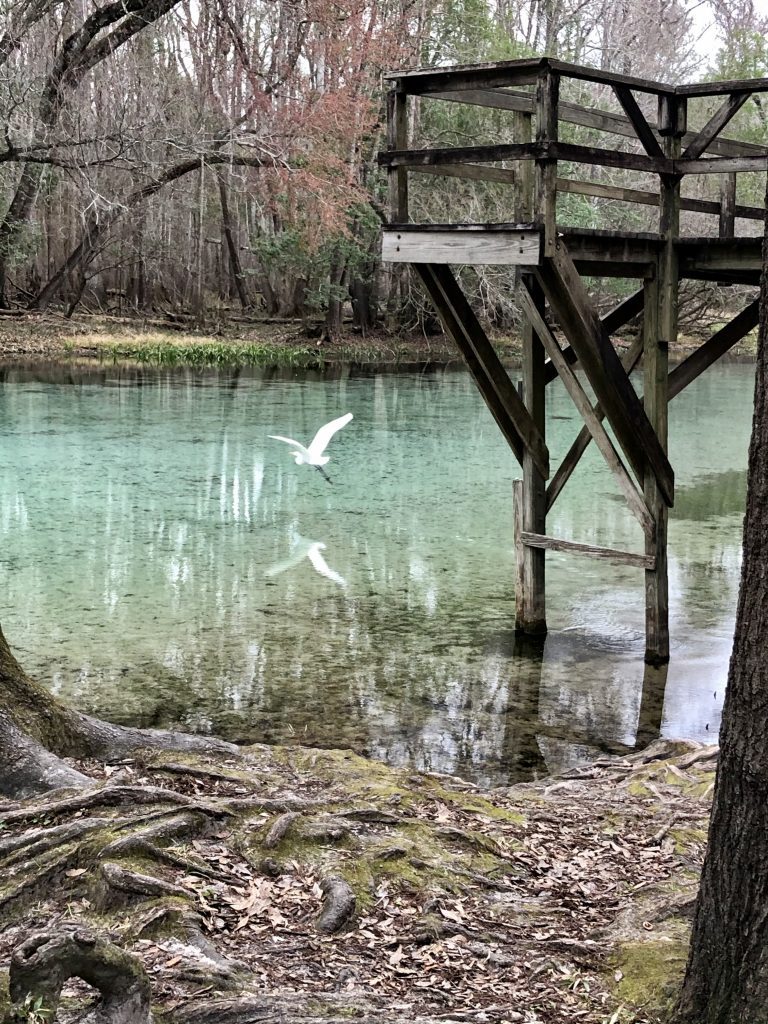 After a smooth transfer to our camp, we all felt that the day had been a great success. You never know what Mother Nature will throw at you, but with the cool temperatures and raindrops here and there, we were all glad we did it and we will do it again.

Tips: When planning your paddling trip on the Santa Fe, pay attention to the level of the river, which varies with storms and rain, especially during the summer months. There are several canoe stations along the river if you want to arrange a transfer or rent a canoe. If two vehicles are available, an easy transfer can be arranged with a little research and a good map.

Thank you for doing your part to respect and protect Florida’s resources and waters.

“In every walk with nature, man receives far more than he seeks.” ~ Ansel Adams.

Chill Out with the Best Soft Coolers